Non-volatile RAM (NVRAM) makes it possible for data structures to tolerate transient failures, assuming however that programmers have designed these structures such that their consistency is preserved upon recovery. Previous approaches are typically transactional and inherently make heavy use of logging, resulting in implementations that are significantly slower than their DRAM counterparts. We introduce a set of techniques aimed at lock-free data structures that, in the large majority of cases, remove the need for logging (and costly durable store instructions) both in the data structure algorithm as well as in the associated memory management scheme. Together, these generic techniques enable us to design what we call log-free concurrent data structures, which, as we illustrate on linked lists, hash tables, skip lists, and BSTs, can provide several-fold performance improvements over previous, transaction-based implementations, with overheads of the order of milliseconds for recovery after a failure. We also highlight how our techniques can be integrated into practical systems, by introducing a durable version of Memcached that maintains the performance of its volatile counterpart. 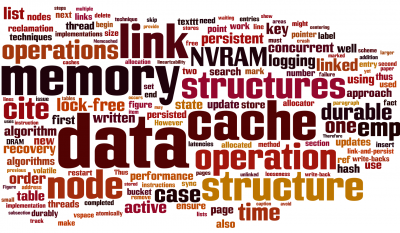